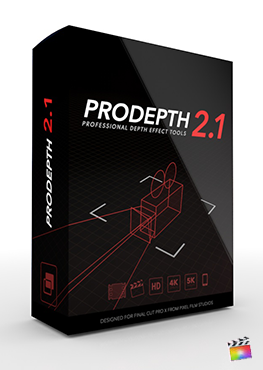 Media depth alteration tools in FCPX
With ProDepth, users can alter their media in a completely new way. With ProDepth, alteration of depth has never been so fun and easy to do. Users can set their camera’s perspective on a customizable route, swing position and rotation, move position, apply a touch, and more all within Final Cut Pro X of Pixel Film Studios.

Motion control
With ProDepth, users can select from various types of camera movements within Final Cut Pro X. ProDepth offers users presets such as custom camera animations, position and rotation oscillations, camera trajectories, a pulsating effect and movement of position. Users have full control over fitness, speed, type of movement and more, all with a click of the mouse.

Designed for Final Cut Pro X
ProDepth was professionally designed to run smoothly within Final Cut Pro X. As an effect overlay, each ProDepth preset can be dragged and dropped on the media and previewed in real time. With the published parameters found in the FCPX inspector, users have the ability to make additional adjustments with just a few clicks of a mouse.